This post is now outdated, please instead check out my newer post on Coalescing Operations for my latest solution to coalescing operations - I'm leaving this here in case anyone needs it.

One advantage that came from this combining was it was possible to prevent duplicate network requests to the same resource from happening at the same time by coalescing (combining) these duplicate operations together. By preventing these unneeded requests, we save the user bandwidth and also make the app feel faster 🏎️. In this article, I look at how to coalesce operations.

In the below example you won't see any networking code as I will focus purely on coalescing, but it should be possible to see how combing this example with the example in "Networking with NSOperation as your wingman" can lead to a really performant networking stack.

'To coalesce' is defined by the Oxford Dictionary as to:

combine (elements) in a mass or whole

When we coalesce our NSOperation subclasses the objective is to only execute the task that the NSOperation instance encompasses once (within the time it takes for that operation to get to the front of the queue and be executed) regardless of how many times the same task was queued. Each request for the task to be queued should be honoured with a coalesced operation triggering multiple callbacks - a callback to each queuer.

Let's begin to explore how we can do that by looking briefly at the classes we will later explore in more depth:

Diagrams are always useful so let's look at how the classes are connected. 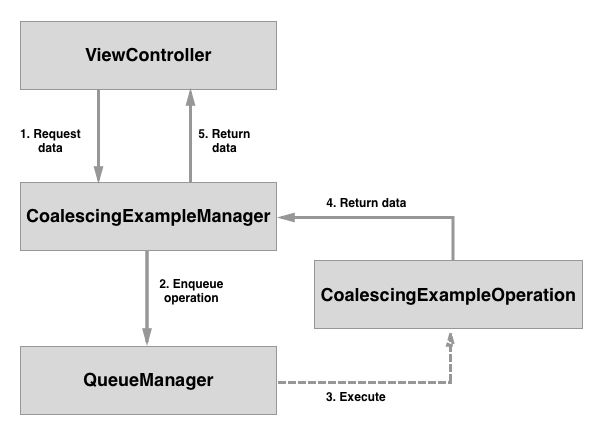 Getting to know each other more

Now that the introductions have been made, let's explore what we have:

Please note that I've chosen very generic names in this example. Typically this manager would be called something like: FeedAPIManager, UserManager, etc.

The above manager will schedule the operation to be executed by passing it to the QueueManager. There is a lot happening in the above class so let's work through the unique parts.

Above is the method's signature which accepts two parameters: queueManager and completion. queueManager is the object that the soon to be created operation will be in enqueued on. completion is a closure that will be called when the operation has finished executing (it's also the way we will coalesce multiple calls together).

Each operation needs to have it's own unique identifier so that we can determine if the operation is already in the queue.

Our coalescing approach is built on taking the closure (or closures) from an operation storing them outside of the operation, injecting our own closure into operation and then iterating through the original closures and triggering each one individually to ensure that all interested parties are informed as to the outcome of the operation. The above code snippet is our first step in this process by taking the original closure and passing it to the QueueManager which will store it alongside the operation identifier.

Here we create the operation itself and assign it the same identifier value that we used for coalescing the completion block.

Ok, so here we inject our own completion closure into the operation which takes all the coalesced closures and executes them one by one. When all are executed, it then clears the closures from our queue manager so ensuring that we don't accidentally coalesce closures from an already executed operation with a new operation's closures.

So in the above class, we use QueueManager a great deal for such a small method so let's explore this one. For my more sophisticated and charming readers who have read the previous post I linked to at the start of this post QueueManager is a class that you are already familiar with (if you want to be sophisticated and charming just go back and give it a read through 😏).

Ok, I understand you're a busy person and don't have the time to go back through the previous post (especially as it's in objective-c 😱) so I'll take us through it as well. The QueueManager class is a singleton that holds all of our queues and stores the closures that we will coalesce. So let's look through the more unique parts:

The above is a generic closure declaration that we will give us greater control over what closures this class will accept.

The above code snippet shows a lazy-loaded dictionary that will store the closures waiting to be executed. The operation identifier acts as the key and the actual closure, in an array, as the value.

Nothing overly special about the above, we ensure that when adding a closure we create an array to place the closure in, which is then placed into the overall dictionary.

The above returns a subset of the closures stored that match the identifier.

Here we inspect the operation currently on the queue and determine if an operation already exists the passed in identifier.

The above is a tidying-up method to clear away used closures.

Now for the final piece in the jigsaw, the changes necessary to the operation to support.

Bringing it to an end

With this approach, we can ensure that we only execute unique operation within the context of the queue while still supporting parallel processing overall. In the above example, we only support one queue and one type of closure but the QueueManager can easily be extended by adding more properties with the same pattern as shown.

However nothing comes free of charge. We can see in the above that scheduling an operation requires more setup code than a non-coalesced operation and that storing all of those closures will increase the memory consumption of your app.

You can download the completed project by heading over to my repo.