Every app has at least one flow - a sequence of screens that allow the user to complete a given task, i.e. read a news article, post a status update, favourite a photo, etc. Most apps have multiple flows. In iOS, we typically represent different flows by placing each flow in a new, self-contained navigation stack, e.g. in Twitter posting a tweet means leaving the feed and opening a model screen where we can compose our tweet. Most apps have a primary flow that the user keeps returning to after they are finished with secondary flows, e.g. after composing your tweet (secondary flow) you are returned to the feed (primary flow). However some flows don't fit neatly into this primary and secondary paradigm, some flows are temporary primary flows, e.g. sign-up/sign-in, activation walls, device searching, etc. These temporary primary flows act as gates to the proper primary flow; they are designed to hold the user until some action has been completed. 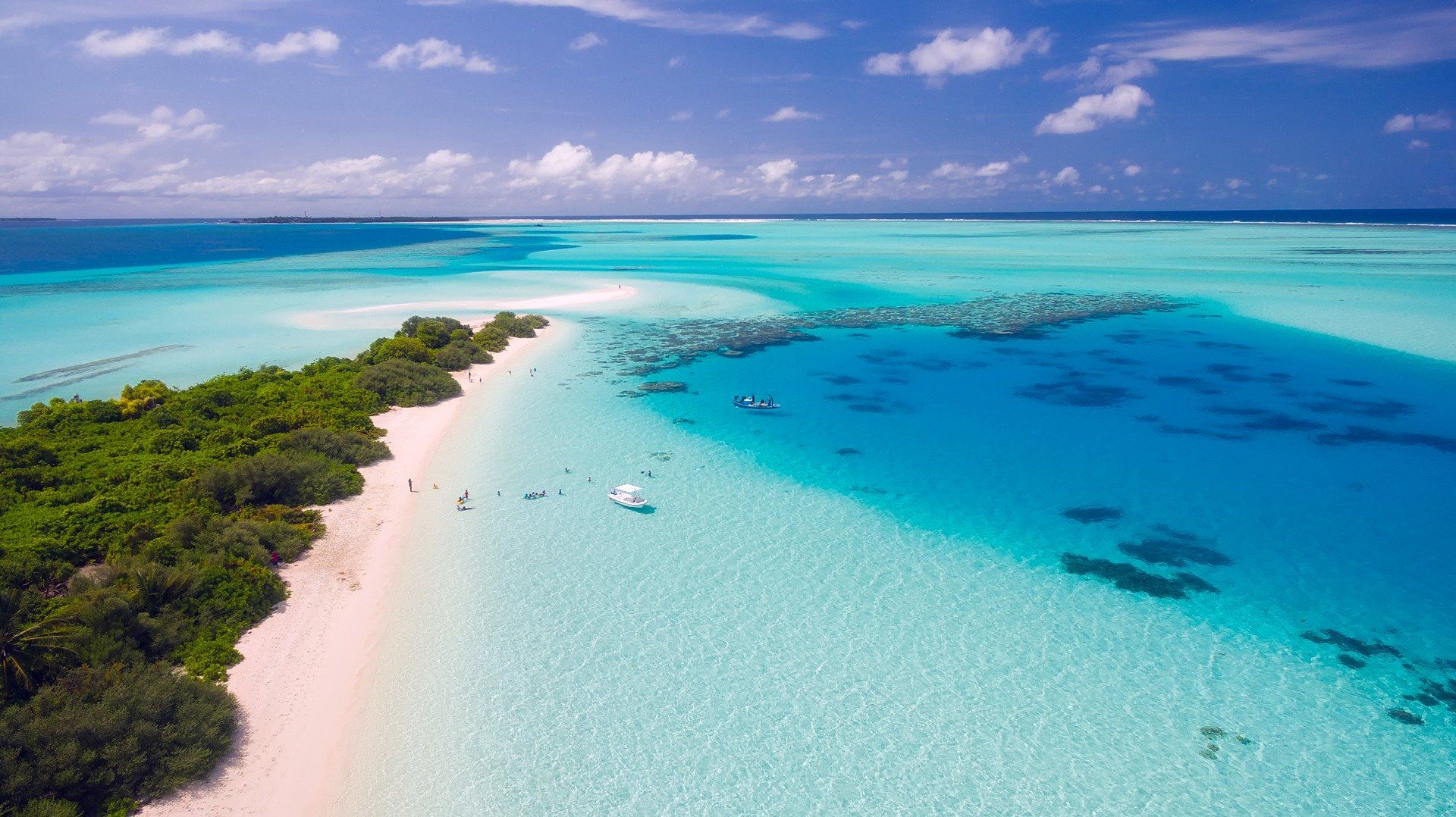 Switching from one flow to another

You may be thinking:

That approach will work most of the time. But there is one deceptively, tricky issue that can come up when using this approach. When transitioning between modal states (i.e. dismissing the onboarding modal and presenting the primary flow modal) it possible that we encounter the following error:

This error is shown when the app attempts to perform a navigation transition when another one is already underway. When this happens, the second transition is cancelled. Having the chance that presenting the primary flow of our apps cancelled is pretty far from ideal. Especially if that cancellation leaves our users trapped in a completed flow that they can't leave - requiring them to force quit the app and relaunch it.

It's one of those bugs that is very hard to reproduce because it's based on a race condition.

You may now be thinking:

When dismissing the onboarding flow, the user would see this holding viewcontroller's view before the primary flow's viewcontroller can be presented (remember we need to wait for any animation to finish - even if we set the animation parameter to false when dismissing the modal). So now we need to decide what to show every user that signs-up or signs-in for that brief second they see the holding viewcontroller's view - first impression count and having a weird transition can give the user the wrong impression about the quality of our app. A much better approach is to take the user directly from onboarding to the primary flow screens with any intermediate (implementation-detail) screen being shown.

We can avoid both the potential error, UI awkwardness and the need for a holding viewcontroller by not presenting the onboarding then presenting the primary flow. Instead, we can manipulate the navigation stack to push the actual primary flow screens without giving the user the ability to go back to onboarding - that way we treat both of them as primary flows, just dependent on the user's state.

The below example is a simple multi-path (sign-up and sign-in) onboarding flow that ends with the user seeing the real primary flow (starting from the tab-bar controller): 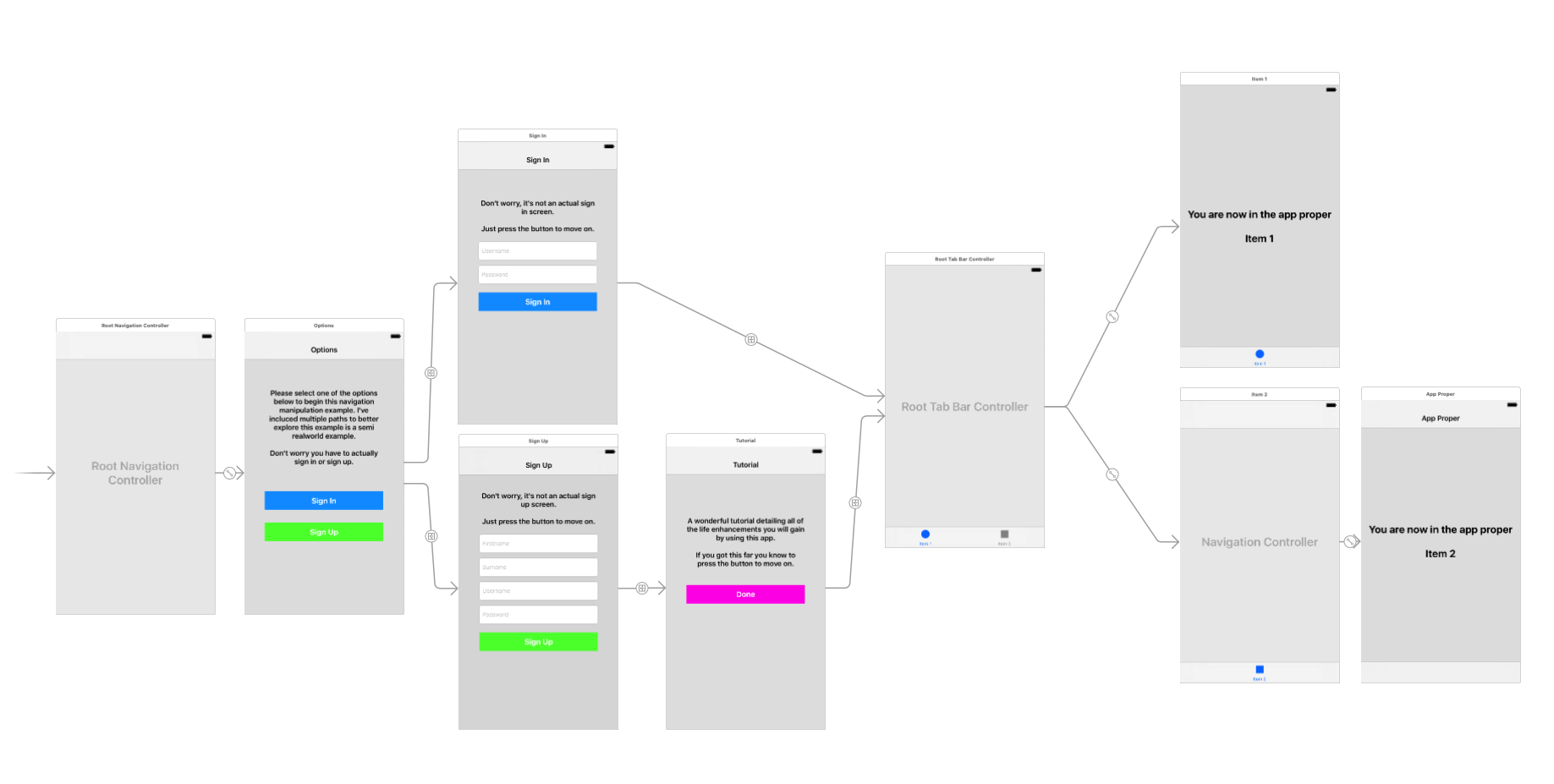 Let's look at a custom UINavigationController subclass that has this reset functionality:

Let's break the above code snippet down into smaller pieces.

We set RootNavigationController as it's own delegate so that we get callbacks when changes are made to the navigation stack:

Here we reset the navigation stack by removing all viewcontrollers apart the last one added.

That's pretty much all there is to this post - we have an app with two mutually exclusive, primary flows. When the head of one primary flow is pushed onto the navigation stack, that stack is reset thus preventing the user from going back to the now dead, other primary flow. This pattern can easily be extended to handle more cases and even conditional heads. So with this approach, we reduce the risk of modal animation collisions in our apps while continuing to have mutually exclusive primary flows depending on the user's state 👯.