UIAlertController alerts form the backbone of a lot of the interactions between our users and our apps. Alerts are often shown at those critical points in our apps where we are asking to confirm an action or allow access to a resource. While there have been some changes to alerts over the years, very little has changed about their appearance. This lack of customisation presents significant difficulties for app designers 😱. Having an UIAlertController alert pop up at the most critical points of our apps with its semi-transparent rectangular layout and standard fonts, breaking the app's theme is enough to make any app designer spill their flat white coffee down their checkered shirt and throw their Caran d'Ache coloured pencils across the table with an angst that few could ever comprehend, never mind experience. At this point, as you gaze into their tear-filled eyes, you offer a few comforting words:

"We can always write our own custom alerts instead"

Slowly as your words start to cut through their anguish, they start to nod, and with strength returning to their voice, they say:

"Sounds good man, I'll get started on those right away"

And with that, you turn away and start thinking about how you can present those custom alerts. 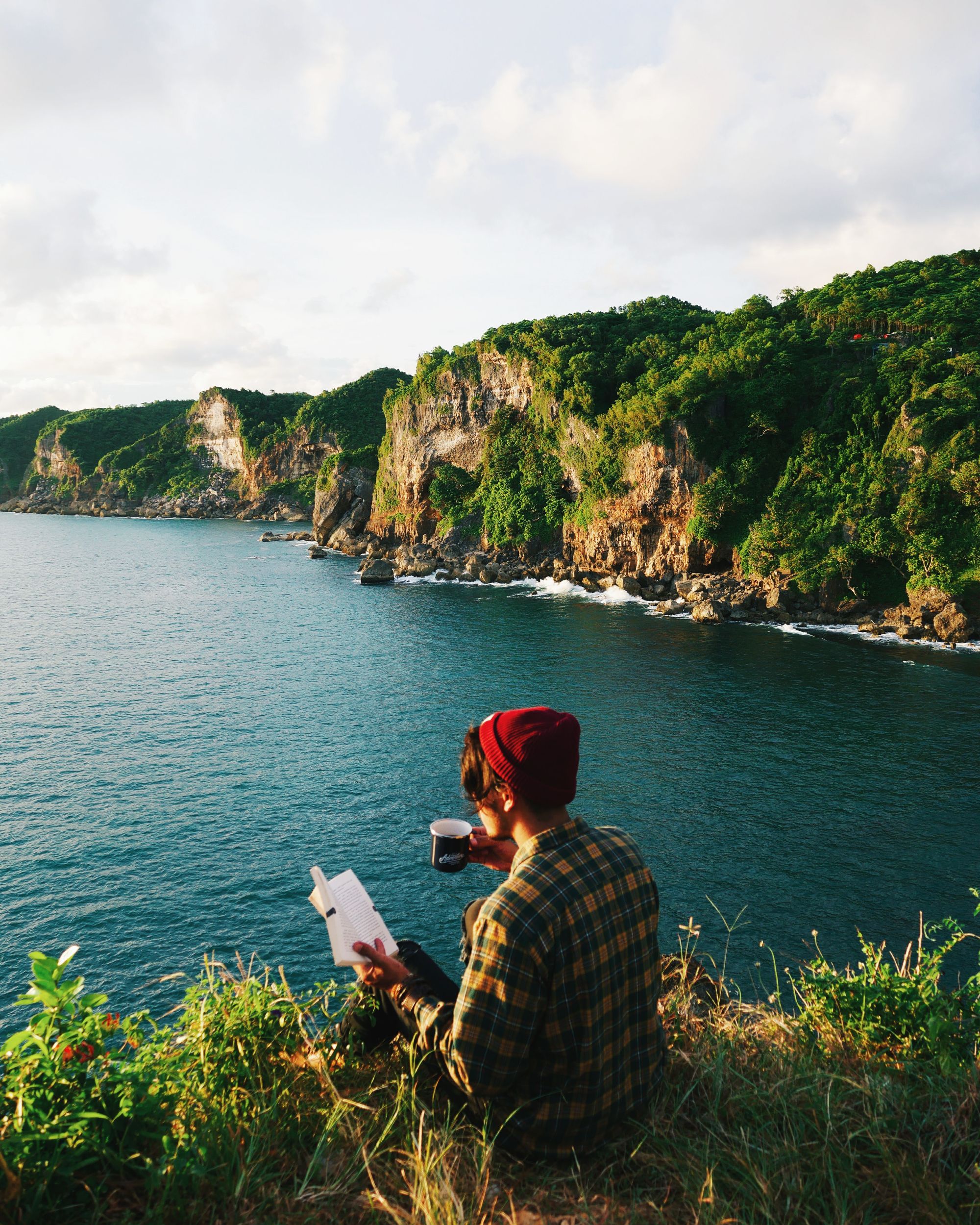 This article will look at how to build a custom alert presenter that will try and follow most of the conventions used by UIAlertController alerts. Along the way, we will even overcome a particularly tricky and challenging to reproduce navigation bug 💪.

This post will gradually build up to a working example however if you are too excited and want to jump ahead then head on over to the completed example and take a look at AlertPresenter and AlertWindow to see how things end up.

Thinking about being standard

A standard UIAlertController alert has 4 parts:

The first thing to decide is:

Let's look at how UIAlertController handles the 4 parts of an alert:

The only customisable part of an UIAlertController alert is the foreground view. This lack of control with the other parts may at first feel limiting, but by preventing customisation of 3-of-the-4 parts, iOS forces us to focus the most critical part - the message. The message is contained in the foreground view.

Just like UIAlertController, the alert presentation layer we will build below will only allow the foreground view will be customisable. This limitation will ensure that presenting and dismissing alerts will happen consistently across the app. Instead of the foreground view being a UIView instance, it will be a UIViewController instance to provide greater control to our custom alerts. This UIViewController instance will be added to the view hierarchy as a child view-controller. This functionality will come together in the following class structure: 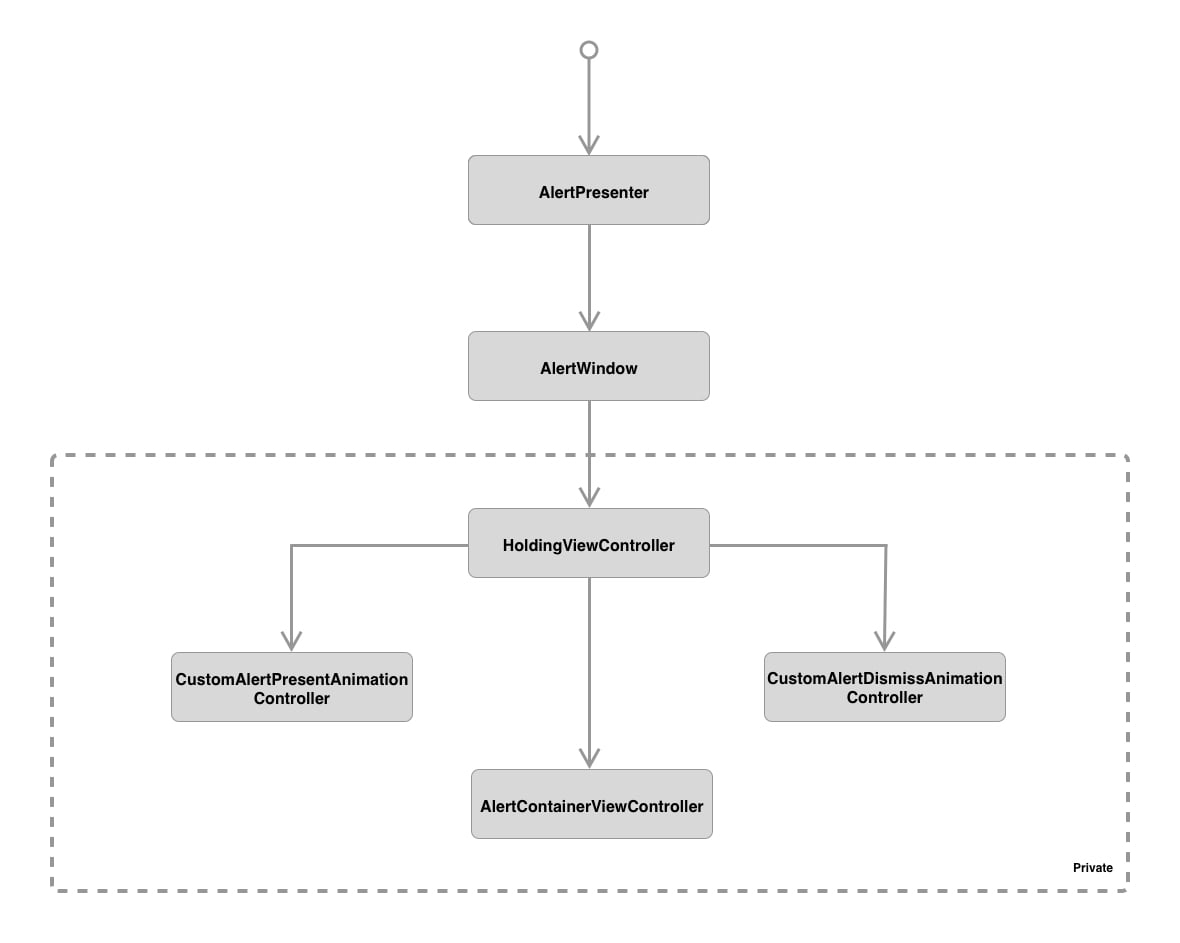 Don't worry if that doesn't all make sense yet, we will look into each class in greater depth below.

AlertPresenter is a singleton, so the same instance will be used to present (and dismiss) all alerts. As AlertPresenter isn't a UIViewController subclass, it's not possible to directly present the alert. Instead, we are going to use a dedicated UIWindow instance to present alerts from. Using a dedicated UIWindow instance should avoid the situation where multiple simultaneous navigation events (presentation/dismissal) occur at the same time, resulting in one of those events being cancelled and the following error is generated:

Before delving into how to use a dedicated window to present alerts, let's get to know windows better.

If you are comfortable with how UIWindow works, feel free to skip ahead.

Getting to know windows 💭

UIWindow is a subclass of UIView that acts as the container for an app's visible content - it is the top of the view hierarchy. All views that are displayed to the user need to be added to a window. An app can have multiple windows, but only windows that are visible can have their content displayed to the user - by default windows are not visible. Multiple windows can be visible at once. Each window's UI stack is independent of other window's UI stacks. Where a window is displayed in regards to other visible windows is controlled by setting that window's windowLevel property. The higher the windowLevel the nearer to the user that window is. UIWindow has three default levels:

With .alert > .statusBar > .normal. If a more fine-grain level of control is needed it's possible to use a custom level:

Where two or more windows have the same level, their ordering is determined by the order they were made visible in - the last window made visible is nearest one to the user.

It's unusual to directly add subviews to a window instead each window should have a root view-controller who's view is used as the window's initial subview.

As well as displaying content, UIWindow is also responsible for forwarding any events (touch, motion, remote-control or press) to interested parties in it's responder chain. While all touch events are forwarded to the responder chain of the window that the event occurred on, events that are outside of the app's UI such as motion events or keyboard entry, are forwarded to the key window. Only one window can be key at any one given time (which window is key can change throughout the lifetime of the app).

An iOS app needs at least one window, a reference to this window can be found in the app delegate:

If you're using storyboards to layout your interface, then most of the work of setting up this window is happening under the hood. When the app is launched, a UIWindow instance is created that fills the screen. This window is then assigned to the window property (declared in the UIApplicationDelegate protocol), configured with the view-controller declared as the storyboard entry point from the project's main storyboard and made key and visible.

If you are not using storyboards you can better see this setup:

As this new window will only display alerts, let's subclass UIWindow for this single purpose:

An AlertWindow instance is only meant to show one alert and then be disposed of.

With the above changes we:

HoldingViewController only has one responsibility - presenting an alert once viewDidAppear(_:) has been called.

Trying to present an alert earlier will cause a navigation collision due to the HoldingViewController instance having not finished its own "animation" on screen. While (at the time of writing - iOS 13) this doesn't seem to affect the actual presentation of the alert, waiting for HoldingViewController to be presented before attempting another presentation ensures that the error isn't produced.

Lets go back to AlertWindow and make use of HoldingViewController:

If you run the project with the above changes and hook in your own alert, you would notice two issues:

An alert should be shown at the smallest size possible - we can't do this if that alert is the modal. Instead, we need to embed that alert into another view controller. HoldingViewController can't be used for this as it is being used as the window's root view-controller so can't be animated on-screen. We need to introduce a new view-controller that will act as a container so that that container can be animated on-screen from the HoldingViewController instance:

With the changes to HoldingViewController we:

Now if you run the above code with your UIViewController subclass, you would notice that your alert is compressed to be as small as it can be and centred in the screen.

Let's change the presentation animation to make it feel more like the UIAlertController.

As we move from one view-controller to another, we are used to seeing different types of animation, the most common being:

I briefly covered the Transitions API above - if you want to read more, I'd recommend this post.

Let's create an animator to handle presenting the alert:

CustomAlertPresentAnimationController can at first glance look a little intimidating so let's break it down:

With the changes to HoldingViewController we:

If you add in the above code changes to your project and run it, you would now see your alert being animated onto the screen in the same way as an UIAlertController alert.

So we just need to add in a semi-transparent background, and our alert presentation will be complete:

Now our alert presentation is complete; let's turn our attention to dismissing that alert.

Just like presentation, dismissal will happen inside the AlertPresenter:

With the changes to AlertPresenter we:

There are a few ways we could have implemented the dismissal logic. In the end, I decided to require all custom alerts to call dismissAlert(_:) when they are ready to be dismissed. This direct calling approach has symmetry with how the alert is presented and is very simple.

If you try to run the above method you will get an error because AlertWindow doesn't yet have an viewController property or dismissAlert(_:) method so let's add them in:

With the above changes to AlertWindow we:

Normally I don't like the level of method chaining shown inside the viewController property. However, I feel comfortable doing it here as HoldingViewController and AlertContainerViewController are private implementation details of AlertWindow.

With the above change, we call the standard UIKit dismiss(animation:completion:) on the containerViewController and trigger the completion closure when that dismiss action completes.

If you add in the above code changes to your project and run it by calling AlertPresenter.shared.dismiss(completion:) when your alert's dismissal button is pressed then your alert should be dismissed. However, it will still be using the standard modal dismissal animation. Just like with presenting, dismissing will need an animator:

Now HoldingViewController just has to return an CustomAlertDismissAnimationController instance at the appropriate moment:

And that completes our custom alert presenter.

To recap, we built a simple custom alert presentation system that takes an alert view-controller, places it in the centre of a semi-transparent container and presents it in a dedicated window, all the while doing so with the same feel as presenting a UIAlertController instance.